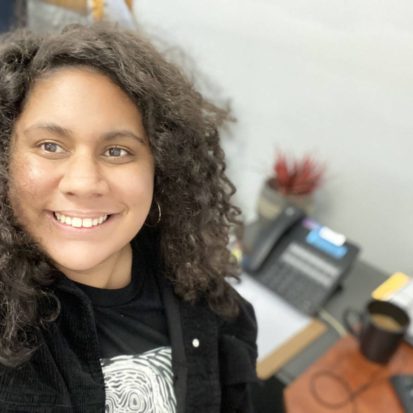 Alkira is a proud Murri and is currently the Community Engagement Officer & Admin Support for the Coffs Harbour and District LALC.

Who ya Mob and Where ya from?

I was born & raised on Meanjin country (Brisbane). I am a proud Birri Gubba, Kubbi Kubbi woman with ties to Gooreng Gooreng, Kalkadoon & the South Sea Islands.

Tell us abit about yourself?

I’m a foodie, love swimming in the ocean and discovering new music and I try to read books when I get the chance. I also curate a digital radio program. Since 2014 I have been volunteering/studying in the Entertainment sector in Meanjin. In 2014 I studied a Diploma of Music Business & in 2019 I graduated from QUT with a Bachelor of Entertainment Industries minor in Digital Media.

I’ve been volunteering in radio since 2017 and now I’m currently producing a radio program called Melanin. Melanin showcases the voices of First Nations people & their accomplishments through music and interviews. From October 2020, I will be volunteering at OneMob Radio Station in Coffs Harbour as a Production Coordinator working alongside Lockie and the wider community.

What are you most excited about, whilst working at Coffs Harbour LALC?

I’m interested to learn how the community work alongside the Land Council team to ensure the best results for the Aboriginal people on the Mid-North Coast of NSW. I’m also excited to engage with mob in different sectors in our community. I’m eager to learn as much as possible as well as being inspired by the deadly work Aboriginal organisations achieve in the Mid-North Coast, NSW.