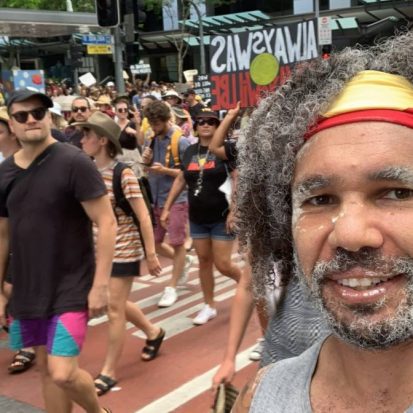 Australia Day is acknowledged as Invasion Day, Survival Day, and a Day of Mourning by many Indigenous Australians.

Mr Brennan says it’s important the nation’s history and on-going issues that First Nation’s people face are discussed on January 26 to ensure we can move forward together as a country.

“It’s is confronting, it’s such a terrible thing, but we need to talk about it,” Mr Brennan says.

As a proud Gumbaynggirr man, he says it would be great to hold a similar march in Coffs Harbour next year to stand in solidarity with Indigenous people across the country.

“Aboriginal people across the country are facing a diverse range of issues that aren’t being highlighted,” he says.

“I think that we are in a good position in Coffs Harbour to be able to support those communities.

“I’ve thought about what we can do here in Coffs Harbour to play our part.””